The strengths of true designs often shine more during times of austerity: the limitations of materials allow the creative mind to offer alternatives that may never normally reach the market place.

During WWII rationing of all kinds were in place and the Utility Design Panel, created in 1943, were commissioned to engage artists from across the board, to challenge their skills in different areas.

Like the Utility furniture and fabrics, there were clear specifications regarding the amount of material and labour allowed to be used in their construction. Some artists had already worked on governmental commissions and were invested with rejuvenating British industries from 1945 culminating in the Festival of Britain in 1951.

War artist, Graham Sutherland, known for his painting, poster designs, glass work and textiles, was appointed by the Government from 1940 to 1945, to mainly depict the work carried out on the Home Front. It was during this time of restriction that he developed more of his textile designs, many with a repeating rose pattern.

Warner & Sons purchased the company, Helios, in 1950. Amongst the paper and fabrics samples was a hand painted paper design from 1940 called ‘White Rose’ by Graham Sutherland. Warner & Sons printed the design almost immediately on a striking red ground and complementary green, re-naming the design ‘Sutherland Rose’.

The image has been re-printed as part of our greetings card range and is also now available as an art print, which is part of the current exhibition ‘Designers in Print’ at Braintree Library.

Shop and Gallery open every Wednesday, and on the first Saturday of the month, 10am - 4pm. 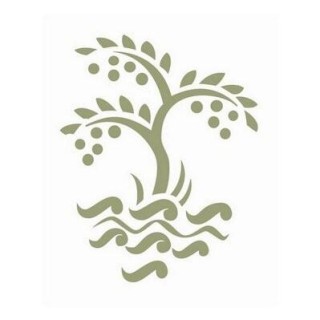 We're a small team with a lot of designs. We also drink a lot of tea.